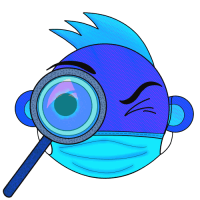 I competed in DawgCTF with the Hack South CTF team on 8 May 2021. This is an 24-hour, entry-level CTF hosted by University of Maryland, Baltimore County’s CyberDawgs. We ended up placing 28th overall.

Here are the write-ups for the four challenges I solved.

Hey, I know it’s 6pm on Friday, but we have a quick request for you. The original author of this software was known to insert backdoors. We need you to find and trigger any backdoors in this software. Oh, and we lost our copy of the client. Hopefully this old pcap the network admin had laying around will be enough. It’s a pcap of someone connecting to the server and downloading files. You might be able to find the original binaries on that server somewhere. nstftp://umbccd.io:4300/ Author: chainsaw10

On first inspection of the packet capture in Wireshark, I could see the client connecting to a server, receive a list of files, request a file and receiving the contents. The Blue parts in the screenshot are sent by the server, and the Red parts are sent by the client.

ASCII misses details because many characters are unprintable. The HEX view of the conversation shows every byte:

To solve this challenge, I most likely need to reverse engineer the protocol and create my own client to send requests to the server. This requires some guessing/assumptions and testing.

Assumption 1 The first byte of each message looks like it could be a message type.

Assumption 2 The second byte of each message looks like a total message length.

Assumption 3 After the byte containing the message size, there are 7 null bytes in all the sample messages. There is no way to know what this area is for. I just assumed they must always be null for now.

Assumption 4 Right after the 7 null bytes, there is a single byte containing the size of the rest of the message.

Putting it all together

Now that I thought I understand the protocol, it was finally time to write a client 😀. The send_message function takes the type and message and sends it to the server. Running below shows the server banner and the list of files.

Note that this quick and dirty code does not validate response lengths or clean unprintable bytes.

There is a binary file called nsftp which is probably the application itself. Below code downloads the file. Again, I could verify lengths but who has time for that? I just assumed the whole file has downloaded once the server stops sending data for 2 seconds. I ran it twice and compared file hashes just in case.

I fired op Ghidra and loaded the binary. Symbols were stripped 😪… This meant original function names were lost, and more will is required to understand program flow.

After searching around for a while and adding names to functions and variables, I found some code that reads the FLAG environment variable and likely sends it to the caller. It was under a number of if statements which means I will likely need to align various pieces of application state to get the flag. 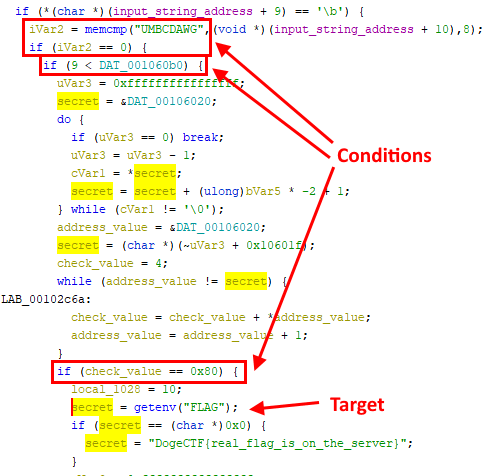 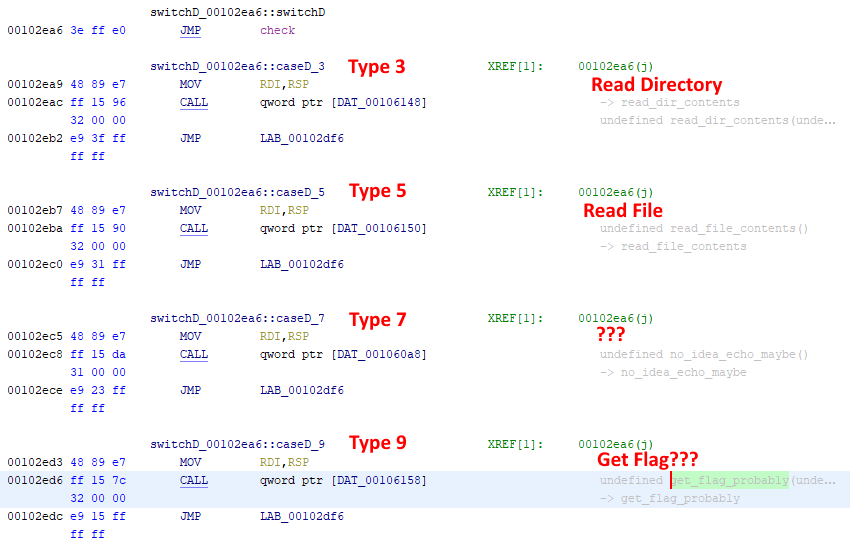 To test this theory, I ran the service locally and sent a request with message type 0x09. The standard output logs showed error code 42.

One of the conditions showed that a value being compared to UMBCDAWG, so I used this text for the second attempt and saw a different error code 43.

I could see that error 43 was one step closer. There were two more conditions to satisfy to get to the code reading the flag value… 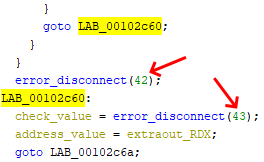 The second condition checks that some memory address’ value is larger than 9.

Ghidra has great feature to find all references to a specified address. I used this to find other places using DAT_001060b0. The first two instances just read the value at that address and the third one was adding 0x01.

It looked like the +1 happened every time the client requested something from the server. I repeated my request for the directory listing 9 times and saw a new error being logged by the local service, code 213. My code now looked like this:

It took some time to figure out what the final condition was checking… It turned out that it was adding 4 to the sum of ordinal values from the provided client, “NSTFTP-client-go-dawgs”. The sum was only retaining one byte and ignoring overflow.

I needed to provide a value that would make that final value equal 0x80. It seemed that providing a client name of | would do the trick!`

It was not to be 😥… Using the pipe character for the client name just resulted in an error code 3.

I suspected the length or some part of the client name was being validated and started playing with characters to get to a final sum of 0x80 by changing the last part. The value that worked was NSTFTP-client-go-dLWGs. It finally passed all the conditions and returned the flag to my custom client! 😀

There’s a bot named MDLChef in the Discord. You need to DM it, it doesn’t respond in the server. On its host machine, there’s a file at /opt/flag.txt - it contains the flag. Go get it. Note: This is NOT an OSINT challenge. The source code really isn’t available. Good luck. Author: nb

The bot on Discord advertises three commands. Below shows the bot response when running each of them.

This bot generates memes using MDL, the Meme Description Language. Here is an example of a valid MDL sample:

Just send a valid MDL snippet in the DM and the bot will automatically recognize it and respond.

Note: The source code for this bot is NOT publicly available, due to the CyberDawgs’ extreme anti-open-source and pro-proprietary stance. We don’t NEED public auditing. All of the code in this bot is totally and completely secure.

This last message hints at a likely issue or escape for the ImageMagick caption command.

I read the ImageMagick documentation on caption and found text can be included from files using @. A few minutes of experimenting later, the following MDL printed the flag on the generated image: 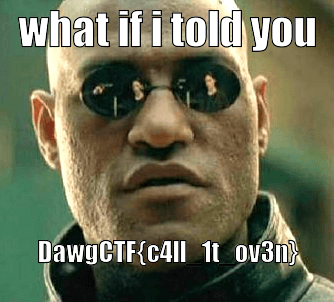 Bofit was a simple ret2win challenge with a slight twist.

Because Bop It is copyrighted, apparently nc umbccd.io 4100 Author: trashcanna

Run checksec to see architecture and security measures on binary.

Open the binary with GDB and run info func to see function addresses. There is a function called win_game which I probably need to jump to to get the flag.

The application requests a random input of one character or a string where the buffer overflow occurs. To solve it, automate the character inputs until the overflow option becomes available. This happens on the Shout it prompt. Then send an overflow payload to set the return address to the win_game address. Once the current function completes, it will return to that function and get the flag.

Running this gets the flag from the server.

4. Back to the Lab 2 PWN Challenge

We installed this new HVAC system in the lab using NI instrumentation. Ooh, it’s internet-connected. Can you get the flag off of it? It requires “company technician access” but we managed to convince the company to give us some old source code, maybe you can find a workaround? nc umbcsad.crabdance.com 8000 back_to_the_lab_2.vi: https://drive.google.com/file/d/1Bu7xpMiGCEPONd7Hdl6BQL6JXqrFWE6i/view?usp=sharing Author: nb

Open the vi file in LabVIEW Community. It shows a few interesting things: